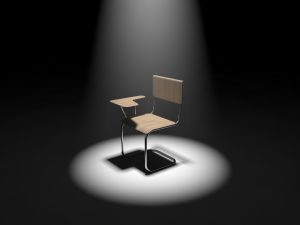 Connections make life meaningful.  They’re the catalyst for relationships, the reason people choose certain jobs, and a great way to make a boring subject like English a little more interesting.

Every time one of my students says, “Hey, that’s like. . .” and connects a poem we’ve read with a book, or connects a character with a symbol we’ve discussed, I can’t help myself.  My feet start hopping like I’m doing some kind of Irish jig, and I shake my hands in the air.

“Connections!” I shout, and they all look away awkwardly.  It’s hard to look at a 49-year-old man who’s acting like he’s a few cards short of a full deck.  They pretend it’s no big deal, but I can see through their masks; when they find that connection, there’s a little kid in them just as excited as I am.

Throughout the school year, my students and I look for those connections, but the ones that really stir up wonder are not the ones we find in books; they’re the connections in life.

Looking at Katie’s empty chair, I wasn’t thinking about connections.  Honestly, my heart wasn’t even ready to teach.  There was a storm raging in her life, and it stirred up a heaviness I couldn’t shake.

As the bell rang and students poured into the classroom, I was lost in thought, thinking about what she must have felt standing outside that movie theatre.

The evening had started as a fun night with friends. After the movie ended and everyone said goodbye, Katie waited for her mom.  Like so many nights before, she expected her to drive up with a smile, asking about her night.

But her mom never showed.

On her way there, an intoxicated 19-year-old kid ran a red light, slamming his car into hers.  She died instantly.  Katie waited outside the theatre, and sirens lit up the night at an accident she didn’t even know had happened.

With no warning and no goodbye, Katie’s mom was gone.

I found out the next morning in an email. News traveled fast, so I knew most students were already aware of what happened.

It was too heavy to force a smile and brush it off.  Something needed to be said, but I didn’t have the words.  The bell rang to start class, and weary faces looked up at me.

With a copy of Othello in my hands and that heaviness in my heart, I took a minute to think, feeling alone in all that mess.

There was no map, no handbook to look up what to say when everyone’s hurting for a classmate who isn’t there.  My eyes were drawn again to Katie’s empty desk.

Some of the students pulled out their own copies of Othello, and then I remembered the scene we had acted out the day before.  Carlos, one of my students, enjoyed playing the part of Iago, trying to get Cassio drunk.  He  was good at being evil, maybe a little too good. 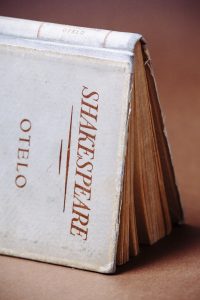 Sam had played the part of Cassio.  Everyone laughed as he wobbled his way around the classroom, and they had loved the drunken sword fight.

How strange to remember that just yesterday we were laughing—and now we were fighting back tears for a hurting friend.

Then, like the flickering of a candle in a dark room, Cassio’s words came to mind.  In the middle of that scene, after he’s made a drunken fool of himself, he laments his wrong: “Oh, that men should put an enemy in their mouths to steal away their brains! That we should, with joy. . . and applause, transform ourselves into beasts!” (Act 2 sc. 3).

Shakespeare warns his audience about alcohol, and one day later, our class sat in the wake of its destructive path.  The Author of my story made a connection, and suddenly, I had something to say.

I took the students back to those pages, and we read them again.  When we finished, everyone stared wide-eyed at their books, shocked at the timing of that scene and Katie’s tragedy.

“Last night, Katie lost her mom because a young man put ‘an enemy’ in his mouth.”  I pointed at the word “enemy” for emphasis.  “Look at the truth here.”

We all knew no teacher could set up a lesson that well.  At least, no human teacher.  Another Teacher was delivering a lesson, and whether my students recognized it or not, we were in His classroom.

“We’re constantly talking in this class about listening to life,” I said, “and this, right now, is one of those moments when life is speaking.”

“Guys. . .” I paused, putting down the book.  “Don’t let this be you.  Don’t let yourselves be transformed into beasts just because everyone else is doing it at some party.” 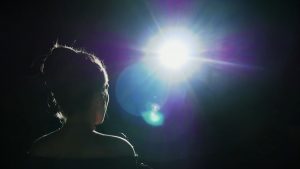 Weeks later, Katie stood before the entire school.  With a courage that’s rare even among adults, she told an auditorium packed with people what happened the night she waited outside a theatre.  Teenagers in the audience, usually snickering or typing away on their lit-up cell phones, sat on the edge of their seats. We’ll never know the exact number, but lives were saved that day because one young lady had the courage to use a darker part of her story to help others.

At the end of Ezekiel 48, God gives Jerusalem a new name. In Hebrew, the name is Yahweh Shammah, but in English it’s “The Lord is there.”

My classroom is far from a holy city; the rattling vent and the desks covered in graffiti make that abundantly clear, but when I stood in front of those students feeling alone, an Author was reaching out. The Lord was there.  He had a message to deliver in a classroom where we all felt lost.  A scene from a play, a tragedy at an intersection, and a classroom conversation unveiled the truth that life isn’t a random collection of experiences.  God was connecting the broken pieces, loving us through the pages of our stories.

That’s all for today! Do you like these stories? A great way you could show your appreciation is by forwarding this email to someone else who might enjoy them. Or did someone forward this to you?  Sign up here to get a story like this one twice a month.  Thank you for your support!