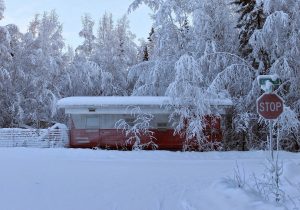 In a small South Dakota town, a little girl crawled under her trailer.  The wind was picking up, and at 20 below, it cut like a knife.  Nobody was home, but she had to do something.  Working her way underneath the bathroom, she pulled at the extension cord.

This better work, she thought.

The sewer line was frozen again.  Frustrated but determined, she remembered her dad’s instructions and turned on the hair dryer.  Blasting the hot air on the pipes, she tried not to think about the cold.

What was she doing out there?  Where were her parents?  The answers to those questions aren’t easy.  Social services had come and gone, responding to reports of domestic abuse.  Between her mom’s struggles with paranoid schizophrenia and her dad’s temper, chaos was the norm, but after the divorce, mom was mostly gone.  Dad too.  He had to work three jobs to keep the heat going.

But she didn’t know any different.  This was life for her: trips to the grocery store, relighting the furnace when the wind blew out the pilot light, and finding her way to school.  She did it all on her own.

That was thirty years ago, and last week, I sat by the fireplace in her living room watching her set the table for Thanksgiving.  There are no more trailers, no more sewer lines needing to be thawed.

As the fire warmed my back, I listened to the conversations humming around her house.  Her daughter, Savannah, giggled as she chased my daughters up and down the stairs.  My dad talked Florida politics with her neighbor.  And Craig, her husband, sat on the couch laughing with coworkers.

Ann is now a wife and the mother of two kids. Her house is beautiful, tucked into the trees on the side of Cheyenne Mountain.  The view outside of the mountain and pine trees is nothing compared to the view inside of the people smiling, enjoying the warmth of community.

We were all talking when Ann walked into the room with dessert.  After pointing out the pies, the German chocolate cake, and the “orange stuff” in the crystal bowl, there was one treasure she couldn’t wait to show us.

“I’ve got something special to show you guys.”

She held up two baking pans. 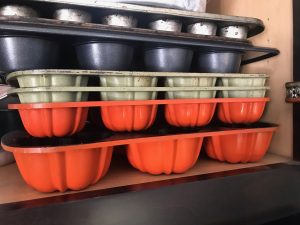 “These were Helen’s.”  Everyone watched her carefully place them on the table.  “It means a lot to have them out today.”

What’s the significance of the pans?” I asked.

“Helen was my swim coach’s mom,” she said.

When Ann was little, she started swimming competitively.  Her swim coach saw her struggling and wanted to help.  Eventually, that same coach bought her swimsuits, invited her for dinner, offered a room to spend the night, and sometimes she’d even take her to Helen’s house.

Sitting in Helen’s kitchen, she’d see those pans filled with incredible food, and as they spent time together, it wasn’t just food Helen offered.  She gave Ann a new Bible.

Ann watched Helen live her life with faith and experienced for the first time what it felt like to be really loved, but the chaos in Ann’s life was too much.  None of that love and faith seemed real.

Until one day during a swim meet, sitting on the edge of the pool, she got desperate.  The race was her biggest of the year.

“God,” she prayed, her feet dangling in the water, “if you’re out there, please help me win this race, and I promise I’ll read my Bible every day.”

They were simple words coming from a desperate girl.  And guess what.  She won the race and followed through with her promise.

She didn’t know what she believed, but she read that Bible every day.

Eventually, during a ride from practice, a swim team mom, Tammy, talked to Ann about what she was reading.  She told her about Jesus and about God being a good Father.  And at the end of the conversation, Ann was hooked.

She couldn’t get enough of this good news that somewhere out there was a God who loved her like a Father, like a father she never really had.

By her senior year, with a sister who had overdosed on drugs and a dad who was always gone, Ann felt God tell her it was time to leave the trailer.  She was scared. Making that decision, to her, meant giving up her future.  There were too many foster parents out there who only saw kids as paychecks.  But she needed a change, so she put herself into a safe house.

The move only made her feel more alone, but her good Father was working behind the scenes.

What Ann didn’t know was that only a few weeks before she made that decision to leave, the swim team mom and her husband also made a decision.

God was leading them to become foster parents.

And guess where Ann was placed.  The same woman who gave her a new Bible and told her about Jesus became her foster mom.  Ann had a family!

I asked her what God taught her through all those difficult years. 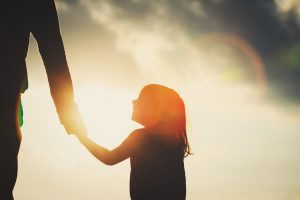 And what makes a good father?  When nobody else was there, He saw her crawling under a trailer in subzero temperatures, and when she prayed on the side of the pool, He heard that prayer.  He provided in every way from swimsuits and coaches to pool victories and a Bible.  And when it seemed the darkness was about to win, He gave her foster parents who already loved her.

I could go on about her survival during a snowmobile accident, her graduation from the Naval Academy, her marrying the husband of her dreams, and her two beautiful kids, but it wouldn’t all fit in one blog post.  That’s the abundant grace of God.  How could a little girl living alone in a trailer become a Naval Academy graduate hosting a Thanksgiving dinner?  I’ll tell you how.  Her story was written by an Author who loved her.  Every twist and turn proves it.  But He’s more than an Author.  He’s her Father, and no matter how hard those South Dakota winds blew, He never left her side.

That’s all for today! Thanks for reading.  Do you like these stories? A great way you could show your appreciation is by forwarding this email to someone else who might enjoy them. Or did someone forward this to you? Sign up here to get a story like this one twice a month. Thank you for your support!