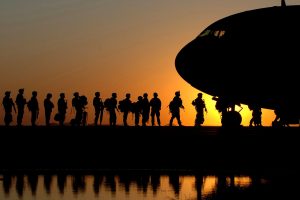 “Please help me,” I prayed.  I was overwhelmed.  Hundreds of teenagers loaded onto the buses slapping high fives, texting friends, checking snapchat accounts.  To them, the bus was their transport into adventure.  To me, it felt like a C-130 airplane, and I was a paratrooper headed into war.  What was a 50-year-old man doing on a bus headed for Young Life camp? The insecurities and lies incased my thoughts like black oil on coral.

Deb and Joy stood outside waving goodbye under an umbrella.  I looked at them, their faces shining in the streetlight and the sparkling rain, and longed to go home with them.  They knew me.  They were my safe place, but God wasn’t calling me into comfort.  I knew that and clung to the truth He was on that bus with me.

Sixteen hours later, we finally arrived.  The cabin’s AC felt good in the Missouri heat, so I unpacked slowly.  That’s when Nemiah walked into the room.  He’s a sophomore in my English class, a huge football player with arms like giant tree stumps, but his real passion is music.  When he sings, people stop and listen.

He walked over to the window of our cabin and stared at the lake.  His smile can light up a room, and I saw it when he looked at me.

“Mr. Ahnfeldt,” he said.  “I don’t know.  This just feels so right.”  He paused, trying to gather his thoughts.  “There’s something special about this place, something deep.”  I watched him walk from window to window.  He was overwhelmed in a much better way than I was, swimming in wonder, and he didn’t know what to do with it.

Then, he was gone.  As the fan hummed, I leaned back in my chair and looked up at the ceiling.

A few days later, our cabin of 10 men piled into an old troop transport truck, headed for the lake.  Andrew, another leader with our group, was smiling.  He’s 28 with a rugged moustache and an infectious love for life.  When the truck’s engine grumbled into a loud roar, he pressed play on the speaker he was holding.  The guitar opener instantly got all of us laughing.  It was Fortunate Son, popular in Vietnam movies, and suddenly, we were little boys pretending to be soldiers, loading our weapons and headed into battle.  The truck bounced to the music along the dirt road, and the anxiety I felt when the trip began drifted away with the dust behind us. 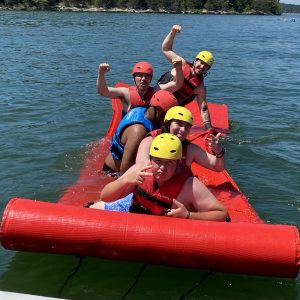 The boats were ready at the dock.  Drivers passed out life jackets and introduced us to the red mats floating in the water.  They’re called Towboggans, and they’ll whip riders right off, especially the ones in the back.  Tylor and Bradan took the front, followed by Nemiah, me and then brave Andrew.

“Are you ready?” Josie yelled from her seat behind the wheel.

“Bring it!” we screamed, flexing our arms like Wrestle Mania stars.

The motor roared, and the boat took off.  Water sprayed against our faces, stirring up nervous laughter, and as the boat picked up speed, gravity pulled hard.  My only hold on Nemiah were a few precious straps on his lifejacket, so I held on tight.

Then, Nemiah did something crazy.

Nemiah, our only anchor on the mat, started sliding toward us with his hands outstretched like he was flying. 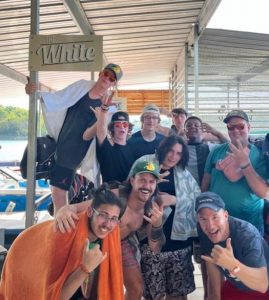 His words caught me off guard, especially the way he said them.  There was joy in his voice, and it felt sacred.

The last night snuck up on us, and by that point, Nemiah had discovered something.  That feeling he had about camp on the first day was God.  The shimmering lake, the rides, the conversations in our cabin, the meals, the speaker—all of it was Jesus knocking on the door of his heart.  After the ten of us got back to our cabin, he asked a question.

“Can you guys walk with me to the top of the hill?”  There was a soberness in his voice.

We all knew what it meant.  He wanted us with him as he let God take control of his life.

It was the best question I’d heard all week.  Some guys gave him high-fives.  Others hugged him.

We gathered around Nemiah, giddy about the decision he was making, walking together into the night.  Then, Jake suggested we pray for him, and when we got to the top of the hill, we put hands on his big shoulders and started praying.  We did the same for Brian, who was taking the same leap of faith as Nemiah.

When we finished praying, Lance noticed something.

“What is that red glow?!” he shouted.

It was a full moon, peeking over the horizon, and it looked like fire.

“Everyone, run to the water tower!” Sam screamed, and we all ran, snaking our way up the circular staircase to get a better view.

Eventually, we were quiet—ten men, leaning over the railing of the tower, taking in a night that felt like magic.

I thought about Kelsey Jenney’s words.  She was the speaker for the week, and she talked about her birthday party that her friends planned, complete with a petting zoo and pony rides.

“God’s love is like that,” she said, “extravagant and personal.” 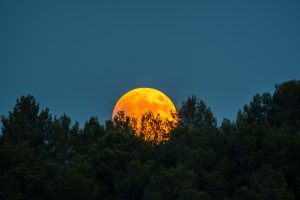 Looking at the silhouettes of those boys in the red moon, all I could think about was that extravagant love of God.  The trip was His idea.  He got me on that bus despite my fear, but standing in the light of that moon and looking back on the week, the evidence was clear; He loved us extravagantly through it all.

Nemiah was on to something when he spread out his arms and screamed, “I’m living.”  The key to really living is letting go, trusting that someone much bigger, someone who loves us extravagantly, knows what He’s doing.  The Author who had the pen wrote into our stories beautiful lakes, brotherhood, and bumpy rides, but He also included an ending to our week we’ll never forget.  He finished what He started, and because He’s the Author and the Finisher, none of us will ever be the same.