Last week, as students were raising their hands for me to collect their final exams, as they were zipping up backpacks and whispering to friends (sometimes not so quietly), I looked at the clock and waited.  A few students were leaning over their tests, scribbling out answers, desperately trying to finish. The bell would ring, like it did every day before, but this time, it meant that these students would be walking out my door for the last time. 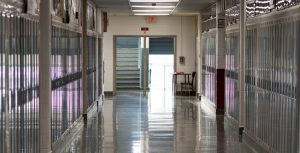 I stood in front of my podium, smiling, staring at them a little awkwardly. With thirty seconds left, I said goodbye and asked a question I asked almost every day throughout the year.

“Hey guys, what are you doing?”  It was the last time I would ask that question, and they shouted back with summer enthusiasm pulsing through their veins, “Listening to life!”

This was our mantra; it was the philosophy that drove the curriculum. Their replies were not always so spirited, but on that last day, they belted it out. The bell rang. Some students lingered to turn in journals or to ask questions about grades, but in a few minutes, the sounds of lockers opening and closing, the hum of conversation, the announcements from the attendance office blaring over the noise were all gone.

The next day, with the halls deserted and the desks empty, it was time to wrap things up. Grading exams takes me a while. I probably wouldn’t rank myself among the top 10 in grading efficiency; my students wouldn’t either. While Betty was talking with Andrea about her summer plans in New York and Katie was cleaning out her office, I was still grading short answer questions. One by one, my colleagues stopped by to say goodbye, carrying their check-out sheets and wearing a smile.

Jim caught me leaning over the Scantron machine gleefully watching it spit out answer sheets. He was trying to smile, but it wasn’t coming easily. As soon as I saw him, I stopped. The Scantron party could wait. He was headed to Serbia with his wife, and trusting that God was leading them to go there, their plane ticket was one way.

He wasn’t coming back in August.

We made small talk about finishing up with check-out, and then I asked a question.

“Do you want to go in my office and pray?”

“Yeah, let’s do that,” he said, nodding his head and following me. We closed the door, sat down, and moved the chairs to face each other. Before our eyes closed, Jim looked at me and said, “I’ll start.”

“Father, you are not flesh and blood,” he prayed, almost whispering.  “We can’t see you, which makes it hard sometimes to feel close to you, but you give us friends who are flesh and blood that we might see you through them.” He paused. A wave of emotion caught him off guard. “That’s what makes it hard, God. . .” His voice was shaking, but he finished the sentence, “to say goodbye.” As the wave passed, he prayed for Doherty, for specific people in the English department, and he prayed for me. I prayed too, thanking God for Jim, for the way God used him to be a rock for me, but I kept thinking about his prayer.

When we finished, we both stood up. Like so many times before, God was giving us a taste of something sacred. He was there, and we both felt it. Praying together wasn’t something strange or an attempt to try to be spiritual. It was a part of our routine. For five years, we met with a small group of teachers to pray every Tuesday morning. “I’ll be thinking about you guys on Tuesdays,” Jim said, tears in his eyes.

“We’ll miss you,” I said. With a quick hug, he was out the door. I watched him walk away. A teacher caught him and patted him on the back, and after he paused for a moment to talk with her, he looked back at me. “Thank you,” he said, and then he was gone.

Soon, everyone was gone. I enjoy quiet, but it’s strange walking in a school with no people, my footsteps echoing through the halls. After grades were finalized and my check-out sheet was filled, I walked into my classroom to clean up. 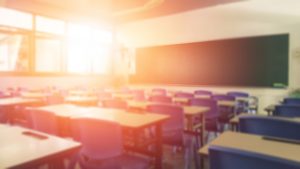 There were huge red, yellow, and green butcher paper numbers signifying class periods taped on the wall, and within each number were little pictures, headshots I took of my kids during the first week of school. They were smiling at me as I took them down.

There was Dustin being goofy for the camera and Violet, looking awkward, probably wondering why I would torture her like that during the first week. Picking the tape off the walls and carefully pulling down each number, it hit me—I’m saying goodbye. I’m saying goodbye to the vulnerability Angel showed during 5th period when she took off her mask and a funny 30-minute debate my 6th period had about a pronoun agreement question.

With the walls of that classroom cleared and nobody around, I found myself standing still in the middle of all the desks. The sounds and memories, as Charles Dickens would say, seemed to “haunt the room pleasantly.” Jim was right. God gives us glimpses of Himself through flesh and blood. He is in the hope Miguel finds after getting out of gangs and in Ayla’s courage to move forward with having her baby. He’s the reason Jim is a rock, and He is the reason it’s hard to say goodbye. It’s hard because it’s good, and it’s good because it’s a taste of the One who made it all happen. I look around to see if anyone is coming. Like Jim, before I turn out the lights and walk out the door, the sadness of goodbye fades, and with my heart filled, I drop to my knees on the tile floor, lift up my hands, and say “Thank You.”