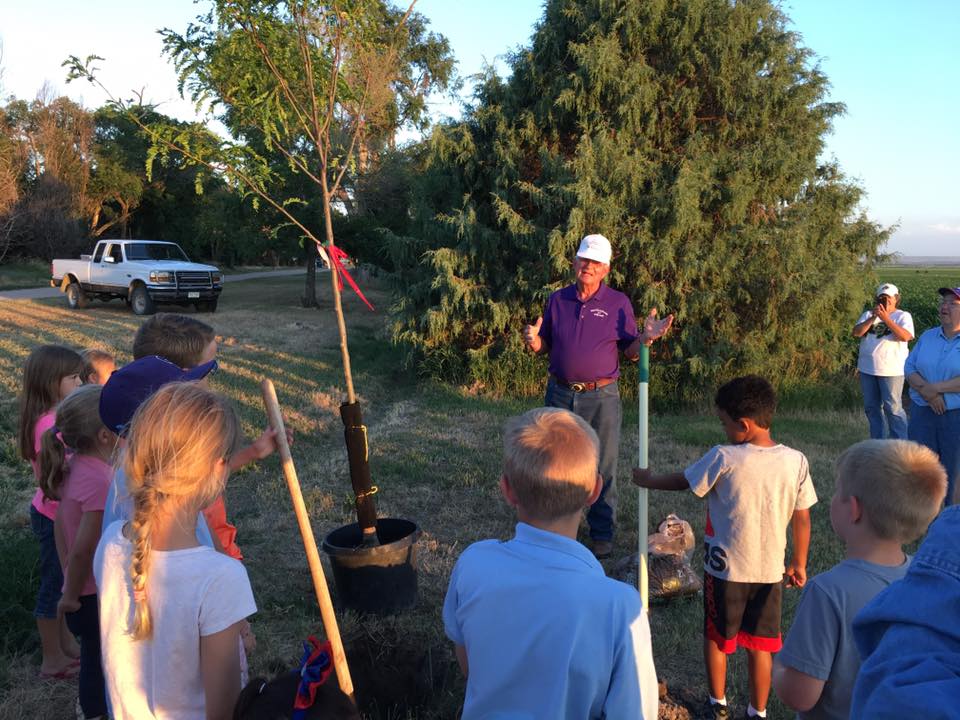 When the sun sets tonight behind the cornfield on my grandpa’s farm, there will be a new honeylocust tree casting its long line of shade into the pasture. Only a week ago, 30 members of one family circled around a hole my uncle dug. We listened as he talked about his dad, how he worked to build the ranch and make it a place that would mean something to all of us. Children listened, holding shovels that were too big for them and quietly staring at that hole while the orange light of the sun lit up the cornfield behind them. There was wonder in their eyes. They could sense, like all of us, that there was something powerful, even sacred about the moment. Uncle Don finished with the reason we were planting a tree. “Grandpa,” he said, looking into our faces, “loved trees, and he planted them thinking about us.” When he was done, he turned to me to read a poem. His wife, Aunt Patty, had written a poem about Grandpa’s love for trees years earlier, but she knew tears might get in the way, so she asked me to read. Her only request was that I read the last line slowly. With meadowlarks singing and faces lit up with orange, I held the poem in front of me and read:

He held it cupped within his hands,

A tender life and new,

And in his mind he clearly saw

Its future as it grew.

He knew he wouldn’t be here then.

Its bulk would never shelter him

When howling winds would blow.

But he continued with his work

Upon his bended knee,

Then rose to take another step

And plant another tree.

After the last line was read slowly, the tree was placed in the hole. We lined it up, and the kids worked at the pile of dirt next to it. Adults watched with quiet laughter and arms crossed, and then the shovels were passed around. Mom and Uncle Don grabbed shovels, hunched over the pile with smiles at each other and tossed in some dirt. Names were called out: “Mandy, did you get a turn?” The shovel was handed off, and the next person would go. We all took turns until the hole was filled, and we did for Grandpa what he had done for us hundreds of times before. We planted a tree.

It now stands there as a reminder of my grandpa, a man who displayed strength and tenderness, two qualities that are hard to find together in one man. The “boxing story” of his first and only year of teaching is the stuff of legends. He bought some gloves and invited the 18 year-old bully who had top-dog status to a little boxing match after school. Let’s just say that when their little “after school activity” was over, there was only one top dog, and it wasn’t that kid. I can still see Grandpa working at a bolt on a John Deere wheel, grunting, sometimes cussing, as he muscled the wrench around, or rolling up barbed wire in his yellow leather work gloves encouraging his skinny grandkids with a firm, dusty pat on the shoulder as he walked by. His hands were strong and calloused, the hands of a farmer, but it was those same hands that my aunt described tenderly cupping a seedling in a clod of dirt. They were the hands that reached out for a firm hug or an invitation for my grandma to sit on his dusty, denim lap while he sat in his favorite chair after dinner.

I can hear him call out to his cows by name, petting their backs as they chomped at their food. “Hey bovina! Hey girl! Here you go, girl” he shouted while he walked behind the pickup breaking the bails we dropped. There was a healthy, respectful fear that I felt working alongside him as a boy, but then I was drawn in by his firm pats on the back, his smile when I wolfed down a piece of sausage and the way those strong hands touched life. I couldn’t see it then, but I do now as a man, and I did a week ago as we all stood around that new tree. Grandpa helped me see God. He held the trees cupped carefully in his hands, and God, like a Shepherd, “gathers [us] up in His arms and carries [us] close to His heart” (Isaiah 40:11). He saw those trees for what they would become, thinking of us. And God, like a perfect farmer, knit us together in our mothers’ wombs (Ps. 139:13) with great plans to prosper us and not to harm us (Isaiah 29:11). I miss my grandpa. Stories about him that come up as the potatoes are passed at family dinners bring me back to the smell of alfalfa, pick-up trucks and dusty pats on the back. Much of who I am was shaped by the time I got with him at the ranch, but there was a God all along behind the scenes of the story, the One writing the story, who was showing me what strength and tenderness looked like next to each other. This is what made that moment around that new honeylocust tree sacred for me. He was using my grandpa to give me a good glimpse of Him. Whether they come through people or experiences, we treasure those glimpses. Praise God for good glimpses of Him, for trees, and for grandpas who plant them.