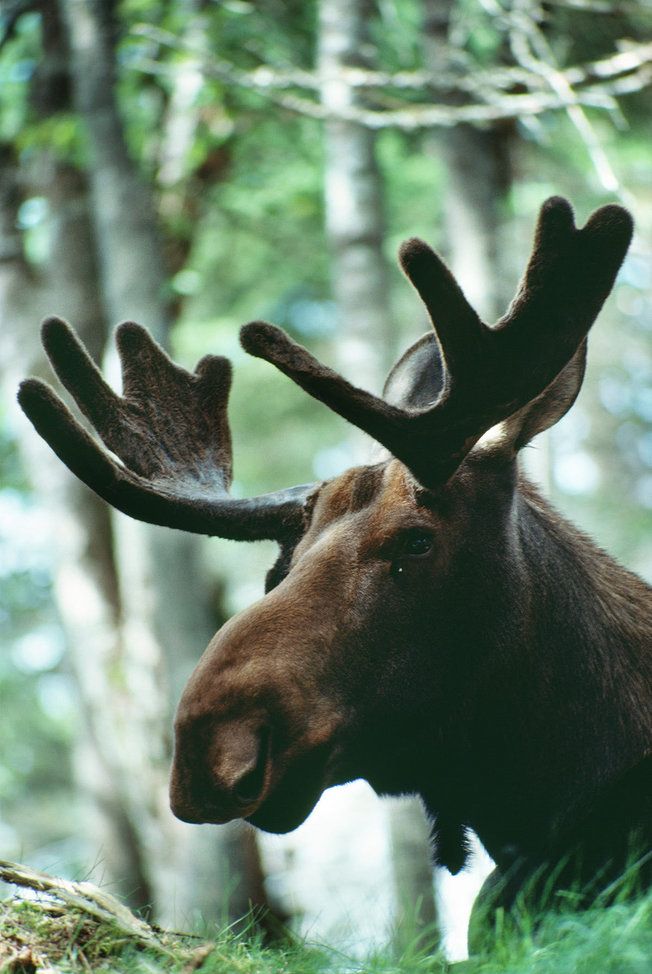 The word “awesome” is tossed around a little too much, but when it comes to moose, it fits. Who can resist the majesty of a moose? I certainly can’t. Standing in a circle with our backpacks resting against our knees, we were a little nervous about what was ahead. Our backpacking guide asked, “What are you guys hoping to get out of this trip?” The answers came one at a time as they went around the circle. “I really hope to experience closeness with God,” someone said. Then another answer came: “This is my chance to face some of my fears.” The profound answers kept rolling, and then all eyes were on me. I was one of the adults leading these kids, but I didn’t want to just be spiritual for the sake of being spiritual, and I knew what was at the front of my mind, so I just said it: “I’m hoping to see a moose.” Some people smiled politely, and we moved on to the next person. As soon as all answers were given, we helped each other with our packs and headed out.

With some kids who had never been camping and quite a few others who gravely underestimated what they were in for, ideally that first day would be nothing but gentle downhill slopes and sunshine. It was none of that. I’m just going to say it. That first day sucked! Most of the first few miles were uphill, and about a third of the way into the trip, rain began to pour down. It kept falling for the next 5 miles, the entire time we set up camp, during dinner, and as we got ready for bed. Kids were standing under trees blowing into their hands to stay warm. Two others asked me if it was too late to go home, and one had a migraine. He was throwing up under the canvas fly that the guides told us would be our “tent”.

The two backpacking guides asked the two adult leaders, Rachel and I, to meet with them to assess the situation. Our faces were not exactly glowing with enthusiasm as rain dripped from our hats, and then one leader recapped what the kids were hoping to experience on the trip. Their desire to grow spiritually touched him, but there was one answer that didn’t fit: “Didn’t someone say he wanted to see a moose?” He laughed shaking his head, and I smiled awkwardly, too embarrassed to point out that the dumby who said that was me. We finished the meeting and headed to our sleeping bags. The only problem was there was not much room under the fly. The tiny space that did exist was next to the kid throwing up, so I grabbed my bag I was really hoping was waterproof, positioned my head under a pine tree and tried to sleep. Rain poured down all night. The wet bag made me feel like a newborn kicking around in a uterus while I tried to make air holes to breathe through the jacket I threw over my face. As I watched the rain come down around me and prayed for the night to be over, I asked God what he was doing. It was definitely not how I expected the trip to go.

Finally, despite frozen feet and a soggy sleeping bag, I fell asleep, and then, in what seemed like minutes, my eyes opened to sunshine. Everything was soaked, but birds were singing, and sunlight was warming the cold ground, warming me. I didn’t want to disturb the sleeping camp, so I quietly unzipped my bag and pulled myself out of the soaked uterus. Everything was beautiful! Raindrops resting in the pine trees were twinkling in the sunlight, and the meadow next to our camp was a rich Ireland green. I could barely see the night before. Now it was all lit up. I walked toward the meadow, enjoying the warmth of the sun, and as I stretched my arms, enjoying the view, my heart skipped about 4 beats. I almost dropped to the ground. Right there in front of me was a huge, brown mother moose and her baby eating in the meadow. Nobody else was awake but me, and after my heart stopped pounding, I just stared at them in silent awe. God was giving me a private viewing. Why? I know why. He wanted me to know two things: He loves me, and He sees. In Genesis 16:13, God comes to the rescue of a desperate woman alone in a desert, and when hope fills her, washing away the despair, she cries out to Him with a heart full of thanksgiving, “You are the God who sees.” God saw me. He saw me as we stood in the circle and I told the group I wanted to see a moose. He saw me trying to encourage the guys that it would get better as rain poured down on us, and He saw me feeling stupid when one of the guides chuckled at my very unspiritual desire to see a moose. It wasn’t unspiritual to God. He knew exactly what I needed. Like Gandalf breaking through the darkness of Helm’s Deep with the dawn, God showed up just when I needed Him with the freshness of a new morning and a moose. The doubt and discouragement of the night before were gone in one move. He was near to me, and that was all I needed to know.